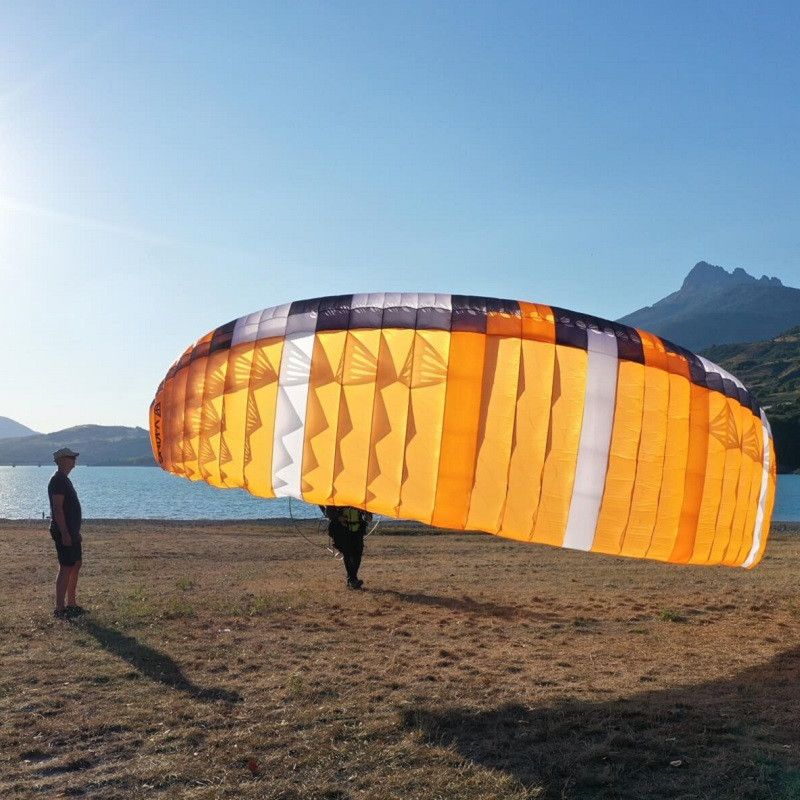 V-King is a compact paraglider EN B class, essentially created for free flying and paramotoring as well.

Small dimensions after packing make the V-king an ideal traveller's wing for a chance flying in the farthest corners of the world.

Simple preparation for launch, easy, pleasant take-off and flight at a relatively low trim speed mean that flying becomes accessible to everyone, and learning it is pure pleasure.

The main advantage of the V-King is its compactness, still allowing for decent performance and pleasant handling. It is perfect to take it on a long journey, because it does not take up much space in your luggage (precious thing in air travels).

V-King is the perfect complement to the suitcase paramotors, recently appearing on the market.

There is fundamental difference between classic double skin and modern single skin canopies. All the launch, landing and steering techniques look a bit different. If you are an established paraglider pilot, you shouldn’t have any problems with adapting to the wealth of new possibilities brought to you by the V-King. However, this doesn’t work both ways: if you started your paragliding experience with the single-skin gliders, be aware that you are not qualified to safely fly standard double-surface canopies.

The idea of ​​creating a hybrid of the classic and single-skin paraglider was born as early as 1999, as a light alternative to the traction kite used in his treks by the well-known traveler and conqueror of both poles – Marek Kamiński.

Due to the technical capabilities of the time and no demand for this type of construction, the project was suspended. At the beginning of 2014 however, the topic returned while working on a prototype of a paraglider RC model (two meter wingspan), powered by an electric drive – the S-lite. We focused on limiting the number of lines and in order to make it possible, our designer Piotr Dudek used V-supports for the first time in this type of construction.

The model and its performance proved so promising that at the end of 2016, the “V-King” project was launched. By using the appropriate number of cells, and a combination of V-supports as well as suspension fins, the minimum number of lines has been maintained under a relatively high wing load. We have devoted a lot of attention to securing an optimal canopy shape. The self-filling, closed tube on the leading edge effectively stiffens it, which is especially important in designs featuring small number of cells. Central tunnels running along the chord play a similar role.

Due to the unsheathed lines, we have reduced the weight and volume of the V-king when packed. It also has a positive effect on the speed of the wing.

The unusually long history of this wing and its development brought about revolutionary results. Compactness, very low weight, versatility and flying characteristics offer the pilots a lot of fun.

In the meantime, V-King became the prototype of the lightest paraglider in the world – Run&Fly.

During testing of subsequent prototypes, V-King aroused interest of instructors and school owners. The ease of launching results in quick and efficient mastering proper skills by the trainees. At a specific request of flying schools, we are currently preparing a dedicated ES version made of more durable, sheathed lines and thicker fabric.

The V-king has passed loading and flight tests, resulting in an EN-B certificate for all sizes. An ULM approval (DGAC) are completed too. 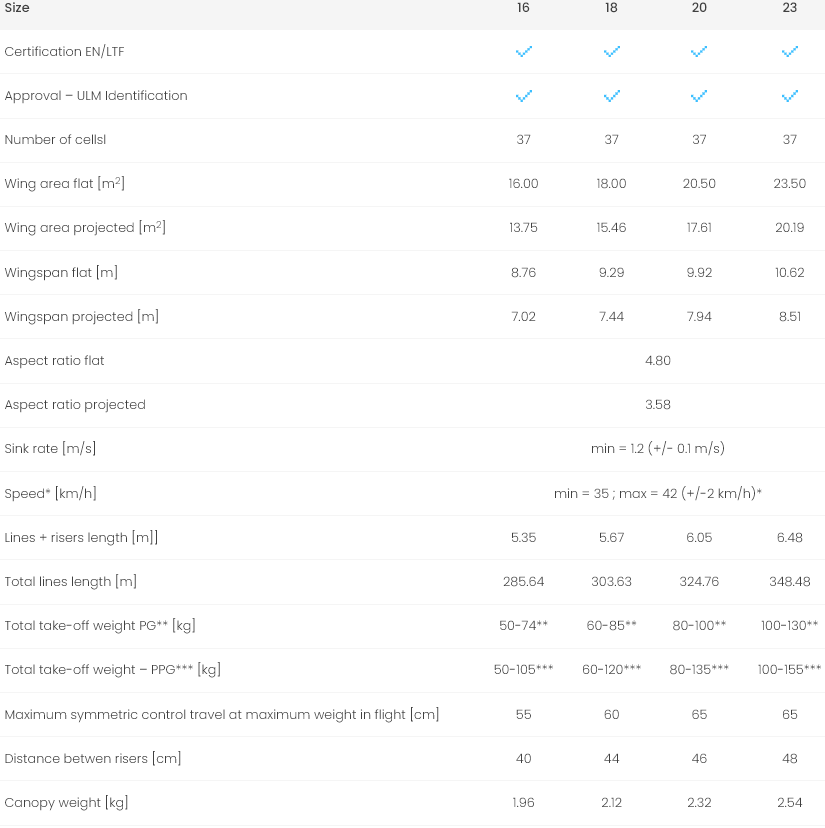 ** The basic rule is to choose the size of the wing so that the take-off weight is in the middle of the weight range. Less weight on the wing (lower range take-off weight) can be considered for foot take-off, when flying in calmerconditions, or when we want to improve economy. More experienced pilots who want to fly dynamically, have higher speed and fly in more demanding wind conditions can consider greater wing loading (take-off weight in the upper range). This is a common option among trike users.