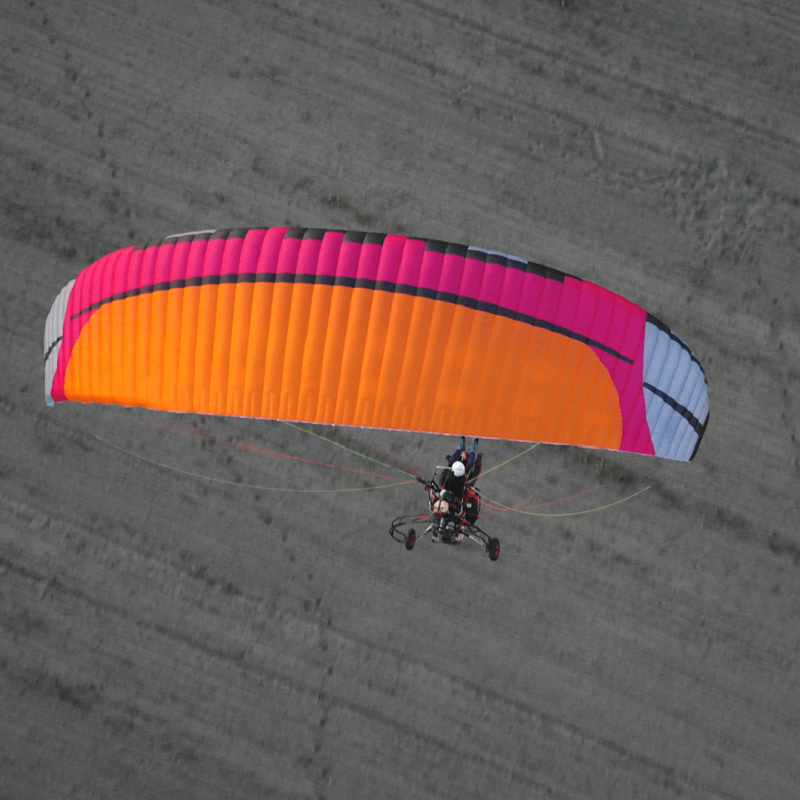 The Cabrio is a wing dedicated for carrying considerable loads. It's ideal for two-seater trikes, but equally well functions as one-seater trike wing and a foot launched PPG tandem. It's a tandem wing both for professionals and leisure pilots.

Earlier we were simply adjusting already existing wings for heavier loads, resulting in “Cabrio” versions of the original designs. Now, seeing the ever growing number of paramotor tandem enthusiasts, we’ve created the real CABRIO – not an add-on for other designs, but a truly uncompromising paraglider, from the onset created to fulfill specific needs of the PL2 pilots

The outline of the Cabrio is similar to our regular tandem paraglider, the Orca 4. Strengthened structure and rigging allow for optimal load distribution along the entire wingspan.

The FlexiEdge stiffeners, inner reinforcements and mini-ribs make sure the profile is exactly reproduced and stabilized. Mini-ribs on the trailing edge also allow it to be slender and reduce ballooning, thus significantly improving the airflow.

Based on the DRA (Dudek Reflex Airfoil) technology, the Cabrio aerodynamic profile is additionally equipped with shark-nose, thanks to which the pressure inside the canopy is higher and more stable over a wide speed range.

Variable profile geometry managed by trimmers allows you to adjust the profile to the current flight status, so that you can have a slow wing with much of lift during takeoff and landing, while enjoying good speed and stability in accelerated flight.

During launch the Cabrio fills up very well and rises with no tendency to fall behind or overtake the pilot. Thanks to the use of an additional delta on the “A” risers (a feature known from our earlier designs, including Nucleon Cabrio), pilot has the option of connecting assisting tapes or lines for the launch, so that only the main control handles remain in his hands, facilitatings full control over the wing.

The entire launch procedure is done over short distance, at slow speed and does not require much power.

The dual control system used in Cabrio is well known from our previous models. The wing is equipped with both main control and small TST handles, mainly used in accelerated flight (open trimmers). Such a system makes it easier for the pilot to control the wing and increases the effectiveness of turning without putting a lot of effort into it. TST lines pass through the TEA cleats, so it is possible to counteract the turning moment of the propeller (through earlier tying a knot at the appropriate height on the TST line, blocking it in the cleat slit). By using the trim system, the pilot can accurately control speed and. On the landing approach a relatively small pull of the brakes is enough to considerably reduce speed and land smoothly.

Our efforts of developing the new Cabrio resulted in a coherent and stable structure offering much lift. All parameters are combined so as to maintain the right proportions of passive safety, performance, ease and precision of control.

In turbulence, the wing behaves predictably and confidently, absorbing both fore and aft or side to side swinging.

Ultimately, the Cabrio will be available in four sizes to meet all expectations of the PPG and PPGG market as of size selection.

Due to very diverse systems of connection, control and trimmers operation existing in PPGG, it is possible to order extended control lines to adapt the wing to specific requirements. However, it should be remembered that using non-standard regulations and adjustments is a personal responsibility of the pilot

The canopy has been designed in our CSG system (Canopy Shape Guard), which consists of several subsystems guaranteeing exceptional coherence of the canopy shape and its extended durability.

The intakes of Shark-nose technology give better glide ratio, greater resistance to stalling (e.g. when circling in thermals) and frontal collapses at high speeds.

The Cabrio is made with the Flexi-Egde technology – the precise shape of the leading edge is kept with laminated cloth reinforcements, incorporating synthetic rods.

Careful selection of modern fabrics and design solutions brings about maximum reliability, strength and durability. All materials come from numbered production batches, and each production step can be verified down to identification of specific worker and controller.

The Cabrio is manufactured in technology utilizing precision of the laser cutter. All stages of production process take place in Poland under strict supervision of the designer himself, thus ensuring highest European quality. 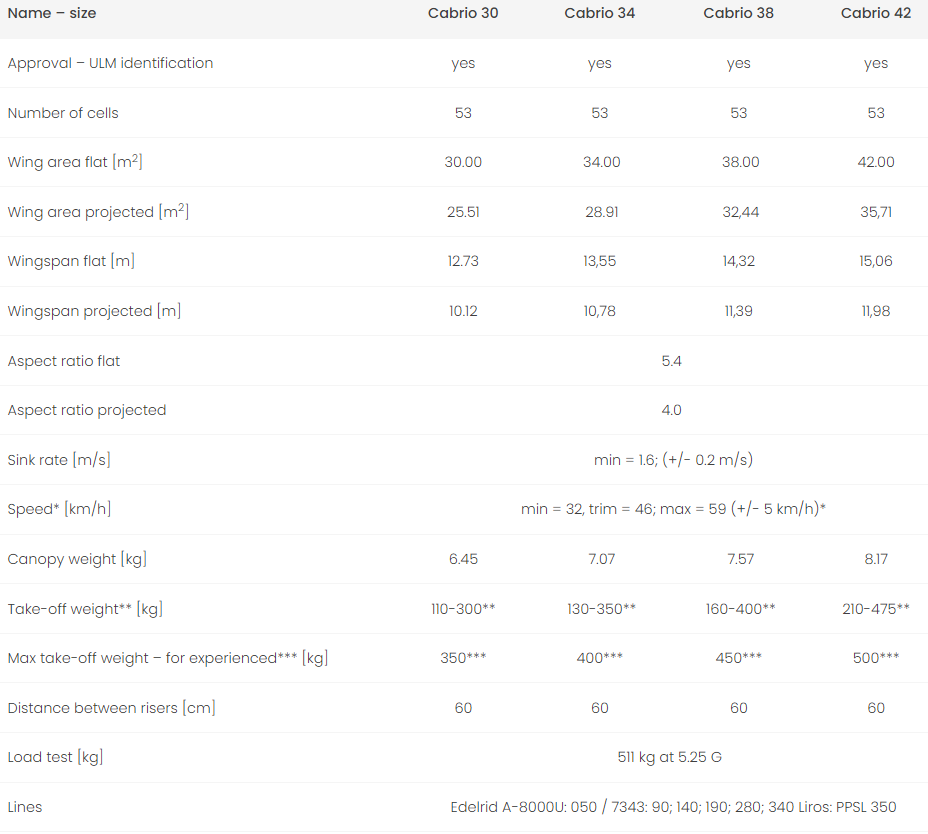 * Speeds are given as estimated for the middle wing size and the middle of its weight range. These speeds can vary within +/- 5 km / h depending on the size, take-off weight and additional factors such as air pressure and temperature.

*** Note – the canopy significantly changes its behavior with increasing wing loading. The greater the loads, the greater skill and concentration of the pilot are required.