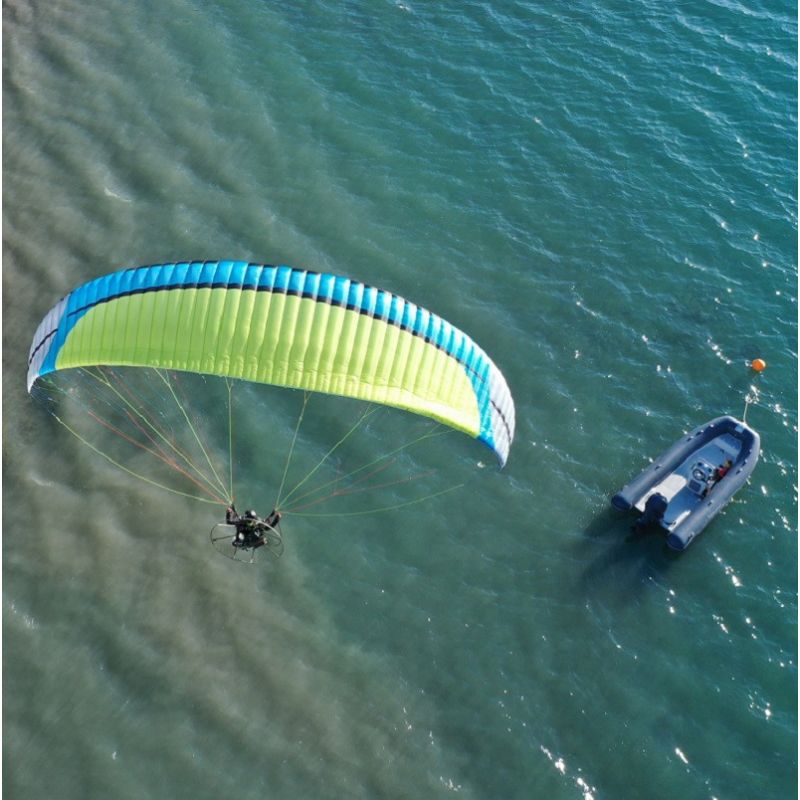 Solo is a pleasant and easy-to-use reflex paraglider for solo fun/XC flying with a paramotor or a light trike. It's design allows for safe gathering experience at thermalling.

It is robust, stable and offers good lift.

Both the design and advantages have evolved from the renowned tandem trike wing – the Cabrio. Solo offers a coherent & stable canopy, creating quite a lot of lift. All parameters have been selected to maintain the right proportions of passive safety, performance, and ease & precision of steering.

Solo will meet the expectations of both recreational and XC pilots. It provides security of the typical B-category wings level.

During the start, Solo fills and gets up willingly, with no tendency to lag or overtake. The entire launch takes place over a relatively short distance, at low speeds. The use of launch-assisting tapes is usually not necessary. We recommend starting with the trimmers fully engaged.

Solo is stable with good lift. Looks good at moderate speeds, but equally efficiently moves forward when you need to accelerate. The elements of reflex and Shark Nose protect your safety, while the general flight chracteristics and light controls make for effective use of encountered lift.

Variable airfoil geometry, adjustable with trimmers, allows you to adjust the airfoil shape to the current flight profile and precisely control the flight speed.

Solo features a dual control system. The main steering lines work similarly to the classic wings and can be used throughout the full range of the trimmer. Small TST handles are used mainly in accelerated flight (open trimmers). Such a system makes it easier for the pilot to control and increases the efficiency of making turns without putting much effort in it.

In turbulence, the wing behaves predictably and confidently, efficiently suppressing both lateral and front-rear swings.

During landing approach, a relatively small pullon the brakes is enough to significantly reduce the speed and land gently.

Solo and its “classmates”

The question arises about the differences between Solo and similar wings in this segment – the Universal 1.1 or the no longer produced Synthesis 2. In a nutshell, it can be said that Solo is a little more advanced when it comes to flight parameters due to its slightly greater aspect ratio (5.4, as compared to 5.1 in Universal and Synthesis), yet at the same time it is easier to use.

However, its “genes” come more from the Orca side, in particular the Cabrio, a fact emphasized by the same graphic design (with a modified color system).

Compared to Synthesis, Solo gets up and launches easier. In flight, its canopy is a bit softer, so that controls are lighter, and pilot can get a better feel of the air when thermalling. It is also more economical and has wider take-off weight ranges.

The Universal is, according to its name, more universal, while Solo is a pleasant, thoroughbred paramotor wing for intermediate pilots looking for uncomplicated wings for fun and cross-country flying. The Solo has a shorter trimmers than Universal, and risers are easier to operate.

The canopy has been designed in our CSG system (Canopy Shape Guard), which consists of several subsystems guaranteeing exceptional coherence of the canopy shape and its extended durability.

The intakes of Shark-nose technology

The Solo is made with the Flexi-Egde technology – the precise shape of the leading edge is kept with laminated cloth reinforcements, incorporating synthetic rods. These rods considerably improve launch quality, as well as keep deformations away at high speeds.

Careful selection of modern fabrics and design solutions brings about maximum reliability, strength and durability. All materials come from numbered production batches, and each production step can be verified down to identification of specific worker and controller.

The Solo is manufactured in technology utilizing precision of the laser cutter. All stages of production process take place in Poland under strict supervision of the designer himself, thus ensuring highest European quality. 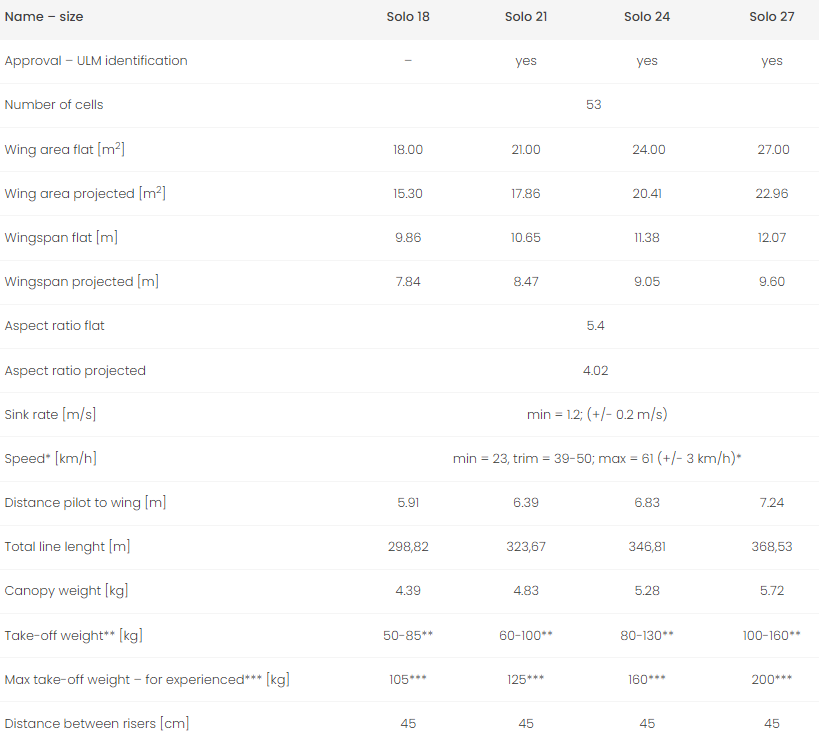